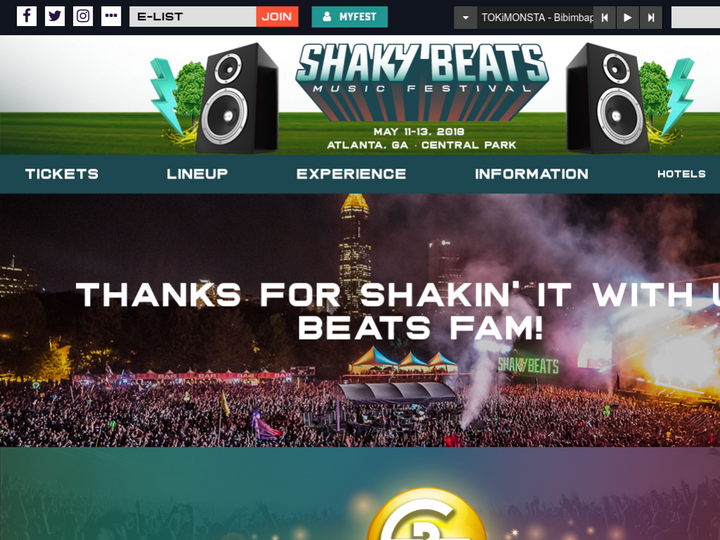 Featuring over 50 top-notch electronic, indie and hip-hop acts across four stages Shaky Beats will have you hooping and dancing the night away. Leave your FoMO behind and come join the party.

Was a grate new experience for myself! Super dope music super dope people!

This festival was done extremely well. Stood in very few lines for entrance, drinks, or bathrooms. The vibes were perfect. Lineup and schedule were pretty darn good. The Ponce de Leon stage is just amazing. Loved the hell out of that stage. Only wishlist items: figure out the soundbleed issue for the Piedmont stage. A couple of major shows there could only be heard clearly if you were close because Peachtree's sound would really carry. Also, put some lazers on those stages. Even if there's only 1 night show each night... we still need our lazers.

Great line up loved the new spot! Having some shade was great when needed! Thank you for brining Bonnie x Clyde they killed it!!

Loved the energy, music, people, and all the love I felt. Will be back next year !

Festivals at Centennial Olympic Park have a certain aura about them. Perhaps it is the absolute central Atlanta location or perhaps it is the park itself, built for the 1996 Olympics. This is my second year attending Shaky Beats and both years have been fantastic. I have been to TomorrowWorld, EDC Vegas, Electric Zoo NYC, Ultra Miami, and a handful of other festivals and this is by far the most convenient and well organized. I do agree with the other comments concerning the lackluster sound system at Piedmont, but the remaining magical elements of this festival more than make up for it. Logistics fade away just prior to entry and you can focus on the only things that really matter at events like these: friends and music. Excellent work!

Shaky was amazing in 2017. We even met Galantis. The line up for 2018 makes me want to cry out of excitement. CAN NOT WAIT. well organized. Glad the location has been moved however because it was a little overcrowded last year. Also, some stages were switched..meaning Bigger artists should have been on the main stage instead of some of the smaller ones.

Great festival with easy and convenient entry and exit. Solid line up with large crowds and solid sets. Great time and cost efficient

Garbage what festivals noghts end at 11. No parking with companies set up to boot your car basically everywhere so you better uber that they set up like this on purpose to ensure to take more money worst cash grab ever. Excision played at like 4pm a visual show sabotaged. This was the first and last time i will ever go.

So I go to will call to pick up my tickets and everything goes through as expected. I bought them from someone who couldn't go who I did not know but since the box office gave us the wrist bands and said our confirmation number was good I assumed it was legit. WRONG. I get to the front to go in and the wristbands don't work, why would they give us the wristbands at will call if they were no good? What a horrible way to run a festival and let people get ripped off. Don't give people wristbands if the confirmation email isn't actually CONFIRMED!!!!

The atmosphere was awful. They charge festival prices for a subpar atmosphere. This festival is literally 2 stages siting on some grass the size of football field, porta Johns and few beer stands. I’ve been to free music events put together better than this festival. For the sake of everyone going this year I hope they stepped their game up.

Absolutely loved it. The views were gorgeous, the food was awesome, bars EVERYWHERE, and plenty of water! Going back and forth from stages was an extremely easy walk with no noise bleed. It was really really dusty but that's to be expected from a park. I just wish some of the sets were a little bit later because it was hard to see some of the visuals a piedmont. � Overall I loved it though! �