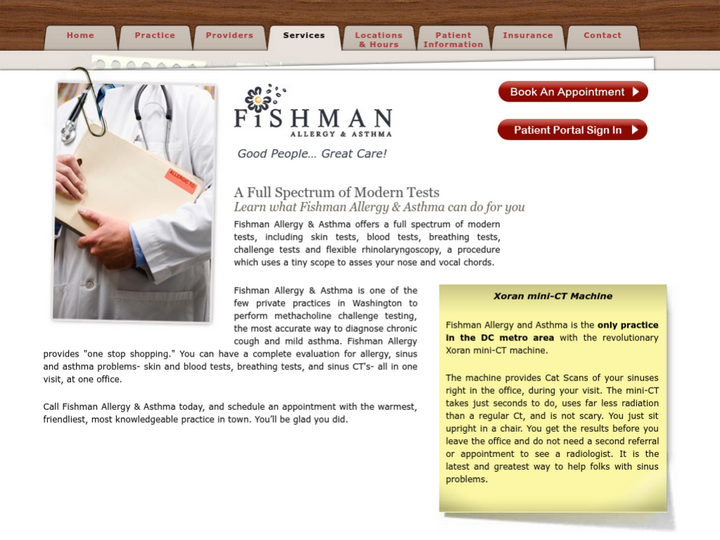 Fishman Allergy & Asthma is dedicated to that something. We know what you’re going through, and we know how to help. Our expert physicians, friendly staff and caring atmosphere make Fishman Allergy & Asthma Washington’s first choice for allergy and asthma care. Call for an appointment today, and let us help you feel better – physically and mentally.

Dr. Fishman is an incredibly knowledgeable allergist. Not to mention he's probably one of the nicest guys ever. And his staff is just wonderful.

Google his wife Caren Turner... See what you're financing when you solicit his practice.

To give you the full story - I'm a healthy 28 year old male, and thankfully not allergic to many of the usual culprits other people are. Back in September I was having some nasal congestion. Could have been pollen, could have been dust, but figured it was a good time to get a base line check to see if I was allergic to anything I was unaware of. Being cautious with my money and time, I set a consultation with Dr. Fishman, and he suggested I get the scratch test done. He quoted me a few hundred dollars for the procedure, and I agreed. The staff were knowledgeable and hilarious, and I don't want this post to be a poor reflection on them. You have to sit there for 20 minutes while they scratch your arm with 40 different allergens ranging from indoor, outdoor, foods, animals, etc - and depending on the reaction is what you're allergic too. 30 minutes later when the redness subsided on my arms, Dr. Fishman came in to discuss the results with me. (I'm allergic to dust and cats, who knew!). He said that he wanted to do a 2nd test to get more information, but I told him the dust was the likely culprit to the nasal congestion and I was all set. He didn't like that answer, and persisted again. Not in a mean way, but I could tell he wanted me as a patient. I politely declined, and told him I'd make another appointment if the congestion didn't go away. Well, it went away, and so I never went back. Soon after, to my surprise, got a $2,200 bill for the scratch test! I called a few times to try and negotiate a more reasonable price (I had ankle surgery that cost less than this!), but Dr. Fishman refused to talk to me. I tried to set an appointment, he was busy all week. I called again to talk with him on the phone, he was with patients. I've talked a lot with Sharron and Sharon, and they have been more than helpful, but unfortunately it seems like Dr. Fishman is ducking me. I have filed a formal complaint with the BBB, and want more people to know how Dr. Fishman extorts his patients.

Dr. Fishman is a wonderful caring doctor who takes the time to listen and figure out how to resolve your ailment.

Worst waiting room experience I have ever had. I waited for 30 minutes in the waiting room. After another 10 minutes in the exam room I asked someone if they could provide a rough estimate of how long it would be so I could figure out my schedule. The nurse while walking away from me without even turning to acknowledge me said he had two before you he will see you when he’s done. I said it’s been 40 minutes since my appointment time and she said he’ll see you when he’s done. There wasn’t even an attempt to care about my time. Waste of time. I decided to request my records and take my business elsewhere if I have to come back regularly for shots. Dr. Fishman finally came out and didn’t even ask why I decided to leave.