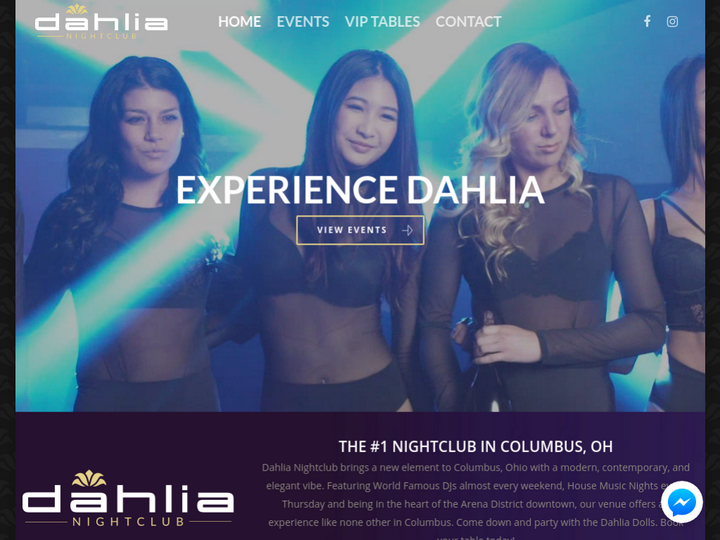 Dahlia Nightclub brings a new element to Columbus, Ohio with a modern, contemporary, and elegant vibe. Featuring World Famous DJs almost every weekend, House Music Nights every Thursday and being in the heart of the Arena District downtown, our venue offers an experience like none other in Columbus.

The bartenders are rude, the bouncers can't put together a sentence much less keep people safe, they're more dangerous then the over served students that the bartenders couldn't care less about. The cherry on top is that the lying drama queen of Columbus, OH works here. I'm sure the city of Dallas is beside themselves you couldn't make the trip, Tiff T.

Nice place. Went on a Friday night. Only negative is that the music/dj wasn't the best.

This is a great spot to go when you really wanna ROCK OUT! The amount of energy in this establishment is off the charts! If there is an event going on there will not be a dull moment. The staff is gorgeous and friendly - what more could you want??

First AND last time I will ever go to the bar. Horrible... The sketchy bartenders managed to put someone else's ENTIRE bar tab on my credit card on Saturday. Tried to contact the manager, by email (because they don't reopen until Thursdays, you can only leave a message by phone) and only received a blank email back and no returned call. Had to file a fraudulent charge with my bank and get an entire new card, which is just a hassle. Will not return EVER. Not to mention the floor was INCREDIBLY sticky and disgusting, and the drinks were overpriced. Save your time and money (& credit card HA) by going to one of the bars across the street or down town.

I decided to try this place with my boyfriend, my first nightclub ever. It is super lame. It's small and the drinks are overpriced. The place isn't worth the ground it sits on.

The Dahlia is nice but doesn't offer much space. Don't expect to move anywhere during events and if you do your spot will get taken every time. Do not, I repeat...do not drink the free shots of vodka that they offer. Whatever it is, isn't the good kind.

Went for a bar crawl l, but I got yelled at for standing near the bar because they wanted to let girls stand there. The heat lamps outside were turned off. Drinks were good, but service was awful.

Just finished up my first and last show at Dahlia. After buying three or four alcoholic drinks throughout the course of the EDM show I was attending, I was asked to pay 4 dollars for a bottle of water. This is simply ridiculous when they have thirsty, drunk, party drugged kids dancing all over possibly about to pass out from heat exhaustion or dehydration. Sure, it might be company policy, but FOUR dollars for 17 ounces of water? I will never attend another event at this venue and I will advise my peers to do the same. Average drink prices. Less than great music venue capacities. Terrible customer service. Thanks Dahlia!

The manager set my group up with a great table outside on the patio. I’m not much of a nightclub guy but we had a great time and were treated very well by the staff.

Went here for St. Patrick's day and I have to say my friends and I had a blast. Great DJ and nice staff. Only problem is the women's bathroom was gross and the drinks were a little pricey, but overall, great experience.

Love this place!!! So welcoming to our bachelorette party. So professional with bottle services and so fun