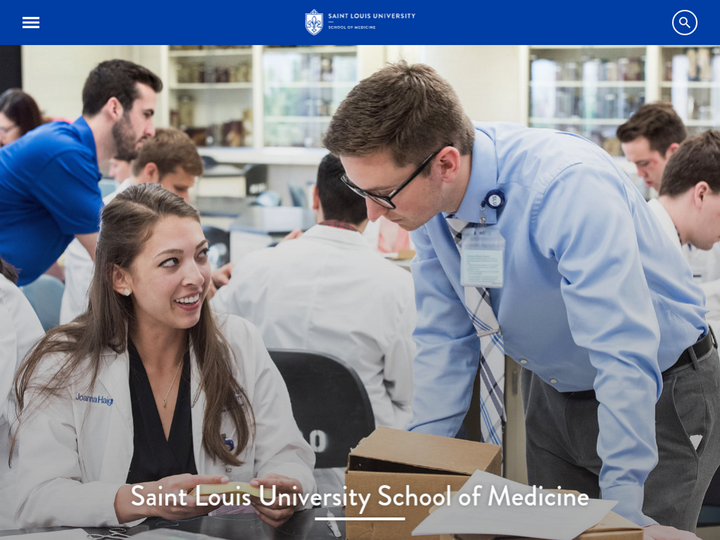 Saint Louis University School of Medicine has a long tradition of excellence in teaching, research and patient care. Established in 1836, the school has the distinction of awarding the first medical degree west of the Mississippi River.

Another "safe house" for close minded babies that can't face the truth. Allen West tried to help you see the light, but the truth is kids are brain washed by radical islam and don't have a clue what is going on in the world.

I was back on campus after a 24-year hiatus (A&S '92), and I was mostly impressed with the physical improvements to the campus. But after speaking with one of the students and noticing the "social justice" position of the school and attending mass at the College Church, I have to say I am terribly disappointed in the progressive turn the school has taken. The student we spoke to when we inquired about the campus culture and the Catholic roots essentially said, "no, not so much Catholic, but progressive." So we've exchanged our faith for politics? Sad. That student didn't even know whether the current president of the school was Catholic or not. When we attended mass at the College Church, there were people actually standing during the Eucharistic Prayer...when kneelers were present. The person we spoke to say, "yeah, kneel, sit, stand, whatever...it's all good. Isn't that nice?" No, it's not. I see a university sullying and misusing it's Catholic identity to promote some broken culture. I have to say, I was so enthused to show my 7 children the campus, and I left broken-hearted. I will pray SLU finds its way, but in my eyes, it will be lost along with the many other university selling its soul to the political progressive movement. SLU is just further proof that our culture and the American Church is broken.

Your President is a disgrace to American ideals as well as to your college! SHAME on Freddie Pestello for denying the right to Free Speech! Colonel West should have the opportunity to share his message without censoring! Here's the info:.."An administrator banned members of the campus conservative club from including the words “radical Islam” on advertisements for the event, claiming Lt. Col. West, a veteran of Operation Desert Storm and Operation Iraqi Freedom, did not have enough “experience” to speak on that topic. Then, administrators sent out multiple campus-wide emails trashing West for allegedly “offending” the school’s Muslim Students Association. The president of the school even referred to him as “distasteful” and diminished his credentials by calling him a “provocateur.” The school then attempted to further cave by demanding a liberal professor speak before Col. West in order to “contextualize” his commentary. As he said this morning, I will not consent. I do not recall ever hearing of any liberal speaker on a campus having their remarks “put in context” before they spoke. I just have to ask, do we still live in America? Do we still have free speech, or are we only allowed to speak when the leftist progressives are accepting? If we’re in a country where we are censored from saying two words — “radical Islam” — then the enemy has already won. But I am not surrendering.

St. Louis University offered me the opportunity to tap into my talents and the staff helped me nurture my abilities, and develop them into newer knowledge base and newer intellectual know how in approaching the challenges, concerns and issues in my area of concentration in educational administration and leadership. The system provided resources for me, to work on areas where I needed some growth and improvements. I grew stronger as a person from the vaults of experiences that enhanced my mastery as a problem solver and as a leader.

The students here are incredible, and although SLU is not perfect, and mistakes have been made, this is a community that the truly fosters and encourages the development of individuals as change agents for the world we so desperately need to better.

I love my university and the fact that we come together to support each other and live out our oath of inclusion. We don't stand by when someone who looks, believes, or loves differently than us is threatened or insulted. Everyone is welcome on this campus as long as they are respectful and tolerant of those who may be different compared to them. SLU is an amazing university and has changed me for the better and I'm so grateful to say I am a Billiken!

Slu is a place where all ideology is accepted. The university strives to form a community where everyone feels safe and free to express their opinions. However, hate speech is not tolerated and the school's students and administration have taken strong stances against attacks made on campus organizations, administration, and the oath of inclusion that has created our community standards. These attacks on the values that the student body has is disgraceful. Slu is made up a diverse student body, all of whom are treated with the respect and dignity they deserve.

I'm disgusted to think that some ungrateful, unsophisticated, cretin is attempting to quash free speech there at the University. If that is true, I'm further disgusted to think that what seemed like a fine Catholic institution would stoop so low as to let this happen. I'm referring to the impediments being created to Col. Allen West's upcoming visit. I attended an upstanding Jesuit institution named John Carroll University where we had a speaker come (female no less) and espouse that she was the real Pope. We invited Bernadette Devlin from Ireland to come and speak. Doing so enabled us to learn and to think for ourselves. Apparently, this is not part of the mission for St. Louis University these days.

Allen West: Just had a conference call with the event organizers at St. Louis University and the YAF for the event where I’m speaking tonight. And it appears campus left wing groups will show up to protest my appearance. Also, I was informed that a professor would speak before me to “contextualize” my remarks – to which I will not consent. I do not recall ever hearing of any liberal speaker on a campus having their remarks “put in context” before they spoke. I just have to ask, do we still live in America? Do we still have free speech, or are we only allowed to speak when the leftist progressives are accepting? If we’re in a country where we are censored from saying two words -- “radical Islam” -- then the enemy has already won. But I am not surrendering.

Reviewing now to present a counternarrative to all the non-SLU-related Allen West drones skewing the reviews. Class of '14 alumna here. I wish that SLU's Oath of Inclusion* were more like a code of conduct and less like an aspirational vision. However, that said, the fact that we have agreed as an institution to share such this vision is itself pretty amazing. So...good on ya, SLU. I learned a lot in my four years with you. Keep moving in the right direction. Your alumni hav...